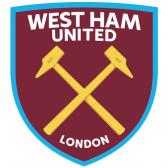 West Ham United is a world-famous Premier League football club that play at the London Stadium in Stratford, East London.

*comission is not paid on sales from products on the online auction.

Email any enquiries to: jwalker@westhamunited.co.uk